Ellen is Chair of the Professional Ethics Committee of the Division, a position she also held from 1997 to 2004, and from 2007 to present.  She is the lead author of the Paralegal Ethics Handbook published by Thomson Reuters..

In 2008, Ellen was honored to receive the Paralegal Division’s Award of Excellence and San Antonio Paralegal of the Year award.

Ellen has more than twenty years of paralegal experience in intellectual property and civil litigation.  She is a frequent speaker and writer on paralegal ethics and is currently employed as a a Trademark Paralegal for Schwegam Lundberg Woessner. 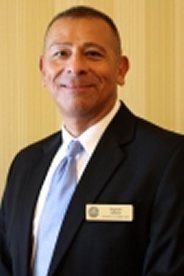 Eugene is currently employed as a Paralegal with Tenet Healthcare Corporation. In this position, his duties include responding to subpoenas and working with in-house and co-counsel on various legal matters. He has worked in the legal profession for over 20 years. He attended El Centro’s Paralegal Program and the Professional Development Institute of the University of North Texas.

Eugene’s professional and volunteer associations include: